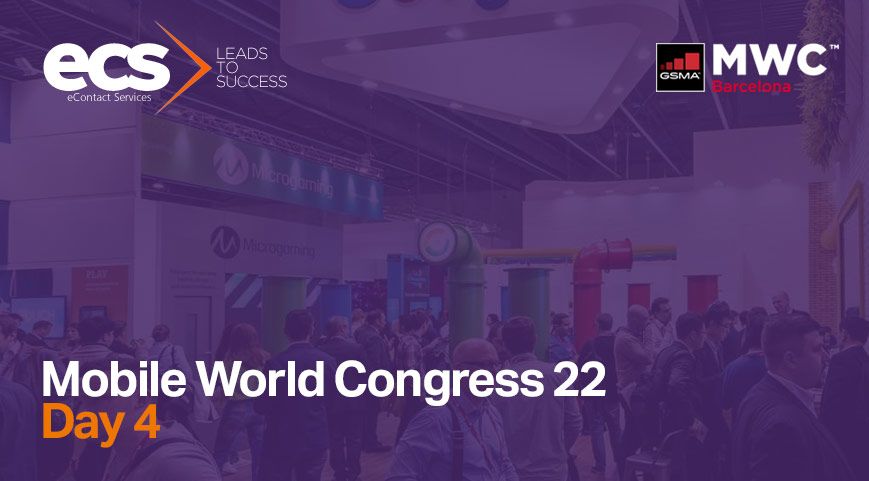 Allegedly, saving the best for last is a pretty good life tactic.

With that in mind, we’ll end our week of blogs from MWC22 talking about arguably the event’s dominant theme, the one that if the telecoms industry prognosticators are to be believed might soon change the “M” in Mobile World Congress. That’s right; the “Metaverse”.

If you were in Barcelona, it’s unlikely you’re not familiar with the term by now but just in case, and for those readers who weren’t there, what is the Metaverse? Analyst firm Gartner defines it as “a collective virtual shared space, created by the convergence of virtually enhanced physical and digital reality. It is persistent, providing enhanced immersive experiences, as well as device-independent and accessible through any type of device, from tablets to head-mounted displays.” In other words, it’s the new playing field for connected engagement.

In our view, and it arguably shouldn’t come as a surprise, the Metaverse hype dominating the corridors of FIRA this week needs to be tempered by a generous dose of reality. While Gartner may be right in predicting that by 2026, 25% of people will spend at least one hour a day in the metaverse (for work, shopping, education, social and/or entertainment), we’re nowhere near close to that yet. In fact, take-up of metaverse-related technologies is presently more embryonic than established and for all the enthusiasm generated by the concept that’s at least in part because it’s not clear how to build an appealing Metaverse and, thus, which investments are likely to pay off. The path to becoming an effective Metaverse player remains to be determined so, for now, research and investigation may be a better approach than jumping in headfirst.

With that in mind, it’s also worth noting that while the word “metaverse” is new, virtual environments are not. Yes, the emergence of, for instance, virtual reality, augmented reality, and 3D, have seen the concept flourish and become more widespread but the fact should be clear; the Metaverse of MWC is at this point evolutionary rather than revolutionary. It’s not a new idea; but an emergent idea whose time may have come.
What did we learn about the reality of the “new” Metaverse in Barcelona? For one thing, the big guns are going all-in. A few examples to underline that truth: Telefónica announced an alliance with Meta for the creation of the Metaverse Innovation Hub in Madrid. SK Telecom presented its new Ifland platform, where users can access different virtual worlds with different avatars and later use services such as Social VR to access that same world from virtual reality glasses. Accenture, which predicts that by 2028, the metaverse market will account for more than $810 billion presented the Metaverse as an ‘Nth Floor’ universe in which companies can meet remotely and participate immersively. All impressive demonstrations of belief.

Still, underlying the marketing hype, the real question for the industry is identifying the technologies that will be critical to driving the Metaverse’s growth. For now, the answer is unclear. Despite the ubiquitous presence of the “M-word” at the event, it was far less clear what those key technologies would be. Technical challenges for the Metaverse likely to yield answers include issues like how to optimize the latency of virtual and augmented reality devices through 5G? How to ensure the proper functioning of the connectivity required to guarantee the experience of the metaverse generally? What are the most effective ways to access virtual environments? Whether the answer is computer or mobile, or virtual reality glasses today’s options probably fall short of what will be required for Metaverse take-off. So what will be required? HTC’s new Metaverse use case is one early and notable answer; a high-end mobile specifically designed with the metaverse in mind focused on creating experiences specifically for the new universe. One thing’s for sure; there’s a lot to play for.

As we head home from Barcelona and look back over the blogs we’ve written and the themes that have emerged this week, it’s notable that, AI, the Metaverse, and Cryptocurrencies among them, the telecoms industry really does appear to be on the cusp of a quantum shift. Most years, the innovations that emerge from the event involve fine-tuning and improving existing products and paradigms. That’s been less the case in 2022. As we’ve noted throughout the week, the buzz this year has been to do with the fundamentals.

This reality (a fundamental shift in the nature of the telecoms business) is going to change the terms of engagement for telco marketers for the foreseeable future. They’re going to have their work cut out communicating with target markets in new ways addressing new topics; adopting the role of educators rather than just playing a pre-sales function. MWC22 has put a range of new opportunities on the table. How to exploit them will require as much innovation as the new technologies themselves.