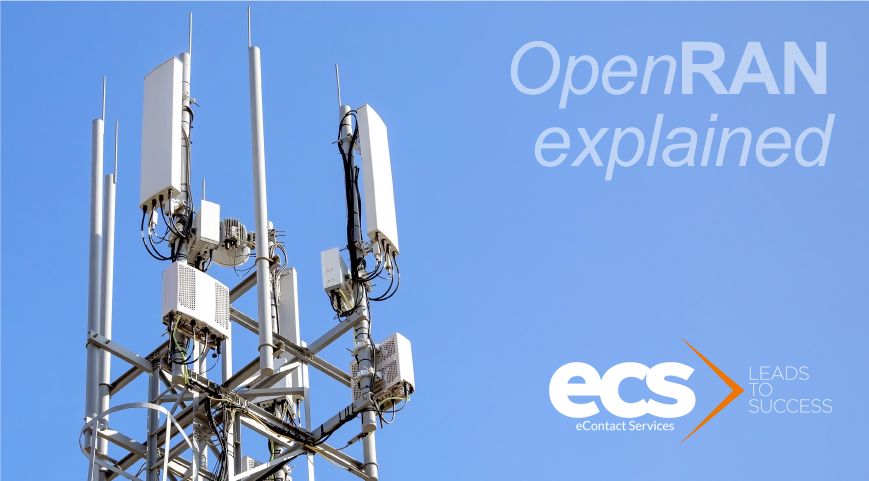 eContact Services looks at the momentum building behind Open RAN and how traditional telco supply chains are being disrupted as a result.

The Radio Access Network – or RAN – is the most critical and costliest part of a mobile network, the part that enables a mobile device to connect to a network. RANs are traditionally built by large network equipment suppliers where the hardware and software elements are tightly ‘coupled’, making interoperability between equipment from different vendors difficult – or impossible. This means that the customer, the mobile network operator (MNO), can be ‘locked in’ to a single vendor. It also means that competitors to these large suppliers – regardless of whether their technology is more innovative or efficient – can struggle to gain traction.

But all this could be changing.

A push towards a so-called ‘Open RAN’ approach has been gathering momentum as we move into the 5G era. Thanks to advances in network virtualisation, Open RAN is enabling operators to run software-based network functions using open interfaces. These open interfaces allow, for example, the use of one supplier’s radios with another’s processors.

Many high-profile MNOs are now pursuing Open RAN strategies. In August, for example, Vodafone became the first UK operator to launch commercial Open RAN, switching on a new 4G network in Wales using cloud-based software from multiple vendors. And last week it announced that, as part of the UK’s government mandate to reduce reliance on Huawei, it would replace more than a third of its Huawei estate with Open RAN equipment.

On the other side of the world, Japan’s Rakuten is another high-profile Open RAN advocate. A new entrant into the advanced Japanese market, Rakuten Mobile launched the world’s first fully virtualised cloud-native network last year and is aiming for 3 million customers by year-end. Last month it struck a deal with Spain’s Telefónica to cooperate on a “shared vision” to advance Open RAN, 5G Core and OSS.

In a recent report, the Dell’Oro Group calculated that the market for Open RAN hardware and software will account for close to 10 per cent of the total market by 2025 and surpass $5 billion in cumulative revenue over this period.

“Momentum is improving, and we have adjusted the outlook upward to reflect a confluence of factors including promising results from initial commercial deployments, growing support from incumbent RAN suppliers, and increased geopolitical uncertainty acting as a catalyst for operators to rethink their supplier strategies,” Stefan Pongratz, VP at Dell’Oro Group, said in a statement.

The “geopolitical uncertainty” refers to the controversy around Chinese vendors such as Huawei, which is providing a catalyst for change in some markets.

Another firm, ABI Research, expects total capex on Open RAN to soar to US$40.7 billion by 2026.

“Trade wars and the global pandemic have resulted in tremendous restrictions on the telecom supply chain and disrupt the evolution of new technologies,” said Jiancao Hou, Senior Analyst at ABI Research. “These effects will accelerate the development of Open RAN and open networks.”

Vendors leading the Open RAN charge include companies such as Altiostar, Mavenir and Parallel Wireless – and many believe this new generation of suppliers could cause serious disruption in a market dominated by large players such as Ericsson, Huawei and Nokia.

But the established players are also wanting to influence how the market develops. In July, Nokia announced its commitment to Open RAN, taking the approach of building open interfaces on top of its existing solutions. However, Ericsson has been less enthusiastic, arguing that more work needs to be done to address risks, such as the increase in security vulnerability caused by the decoupling of hardware and software functions.

Two industry groups have emerged to promote Open RAN: the Facebook-backed Telecom Infra Project (TIP), which runs deployment working groups for its 500+ members; and the O-RAN Alliance, which focuses on setting the open standards. The O-RAN Alliance was founded in 2018 by AT&T, China Mobile, Deutsche Telekom, NTT DOCOMO and Orange.

Many operators and vendors are involved in both TIP and O-RAN, and the two industry organisations are working together. However, as a fast-growing marketplace, navigating the Open RAN ecosystem can be a complex process for companies wanting to reach key decision-makers.

eContact Services can help you unlock the opportunities – please get in touch today!

7th September 2021
We use cookies to ensure that we give you the best experience on our website. If you continue to use this site we will assume that you are happy with it.OkPrivacy policy